The martial arts of warriors and kings

Muay Thai
The martial arts of warriors and kings

The tradition of Muay Thai has a long history of rituals, superstitions and unique cultural views that are not widely used.

What is Muay Thai?
Unlike kickboxing and boxing, Muay Thai uses every part of the body. It is known as "the art of the eight limbs": two knees, two legs, two arms and two elbows. Its powerful offensive abilities make it a popular form of martial arts for the toughest MMA fighters. But it also has an elegant side. Some movements create an almost dancing grace.

As with most martial arts, Muay Thai moves are often combined with other martial arts styles to create a mixed martial arts approach that works for MMA or other combat traditions. For this reason, the rituals and history of Muay Thai are usually pushed into the background or rather forgotten in Western gyms.

History of Muay Thai
The beginning of Muay Thai is shrouded in religious traditions and ancient history. A story tells of ancient Thai warriors using these techniques on the battlefield. Whatever it started, Muay Thai became a hugely popular sport during the reign of King Prachao Sua in Thailand.

It is best to dissect them into separate parts. First, the "Wai" is a bow. This light head bow looks like a prayer and is a sign of respect. It is used in a variety of situations to show respect. Depending on how deep the bow is and how tall the hands are, a certain respect can be shown. It is also a way to apologize, pray or thank. 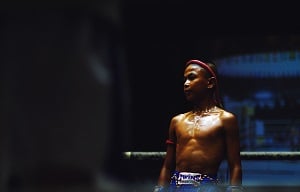 The word "Kru" stands for guru or teacher. This is the person who helped create the Muay Thai fighter. Like many other traditional martial arts, Muay Thai retains great respect for its teachers.

"Ram Muay" literally means "dancing boxing" in Thai, so the "Boxer Dance" is a critical part of the ritual. Just like a musician who warms up, or a baseball player making a few turns, this elegant dance serves a few purposes. First, it is a way to stretch, warm up, and prepare for the upcoming battle. Second, it is a chance to show the teacher and the region to which the fighter is committed. After all, it's a way to assert yourself in front of the audience and to intimidate your opponent.

The Sarama, or Thai music, begins the entire Wai Kru Ram Muay ritual. Traditional Muay Thai fighters will bow in every corner of the ring, spiral into the middle and begin their Ram Muay ritual. Overall, the ritual offers the individual fighters an incredible variety of ways to express the respect of the kings, their teacher and the Buddha absolutely impressive.